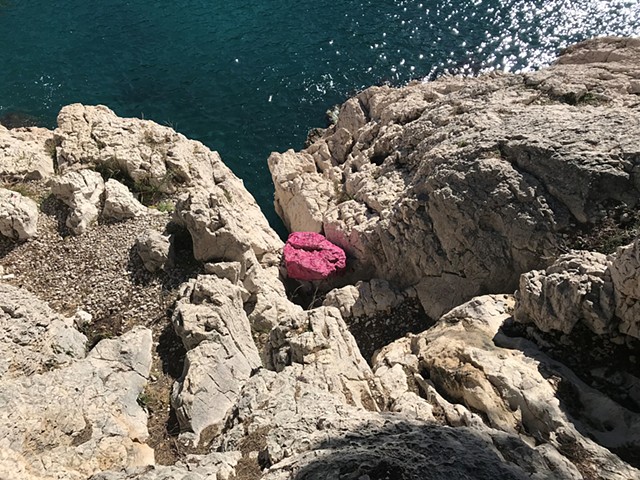 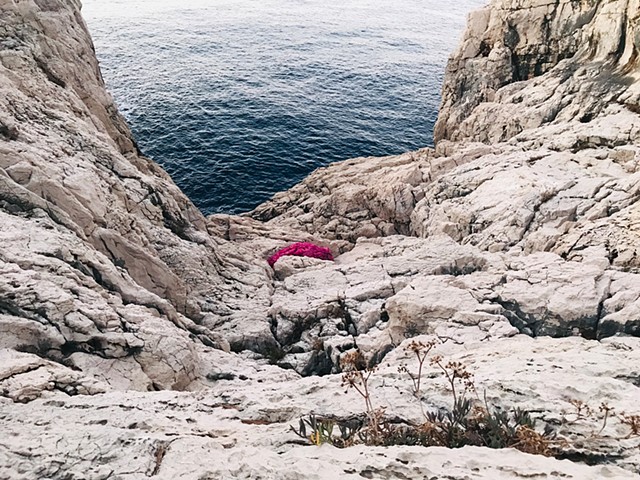 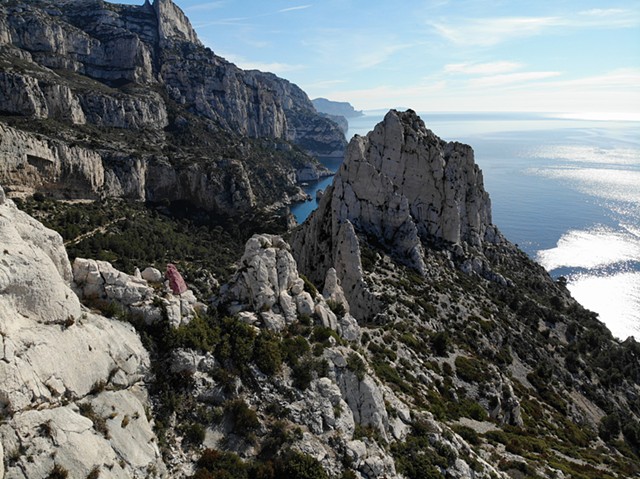 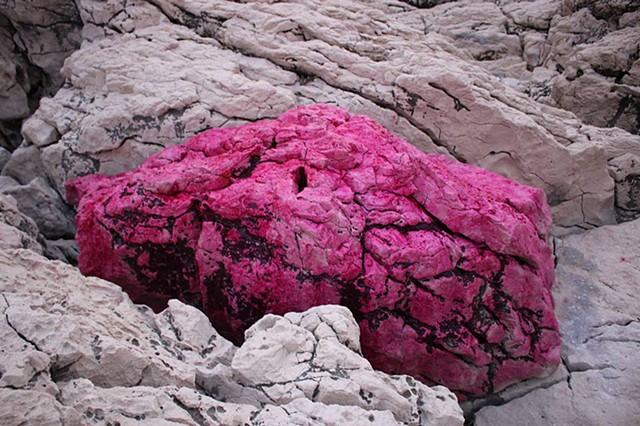 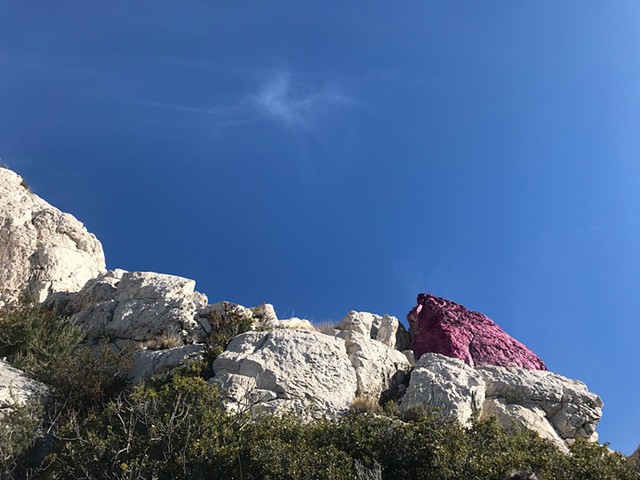 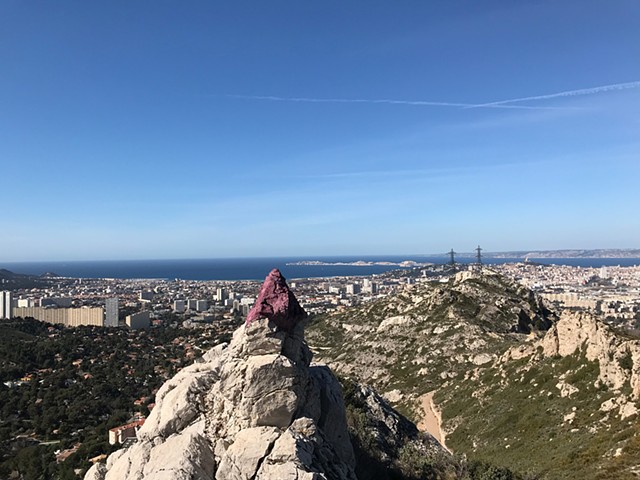 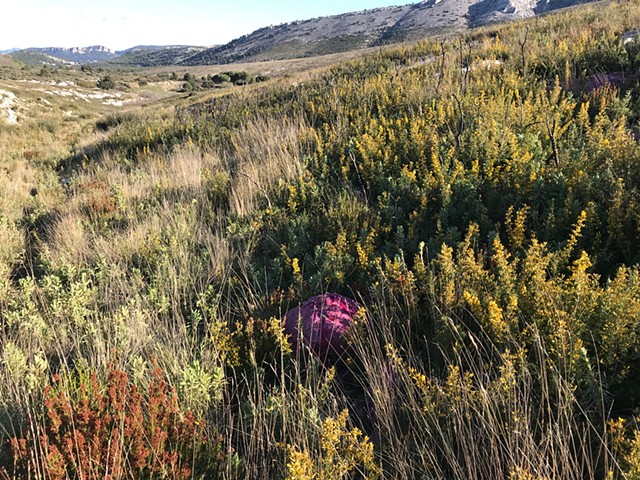 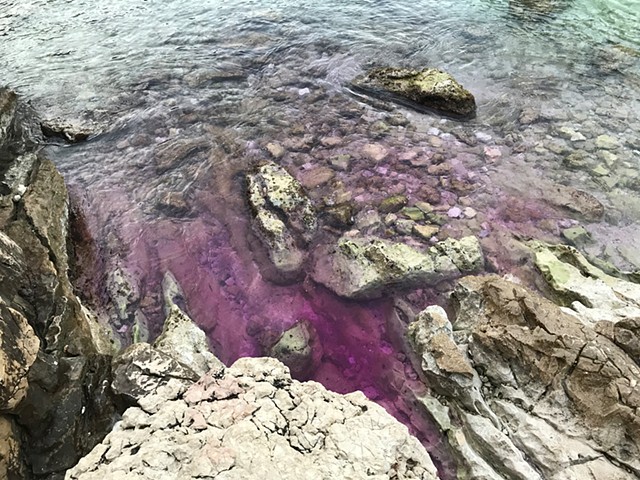 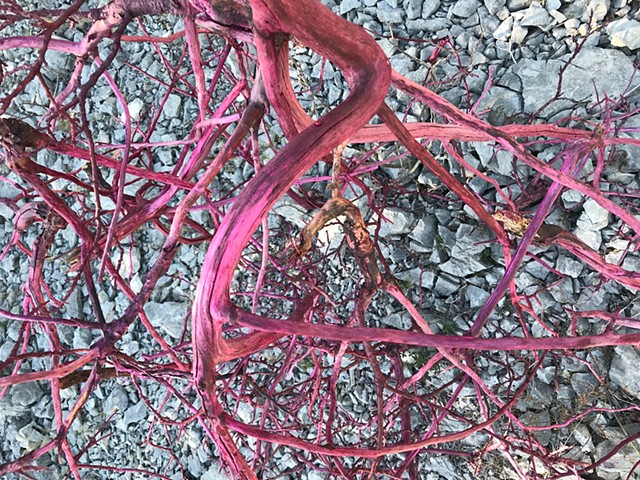 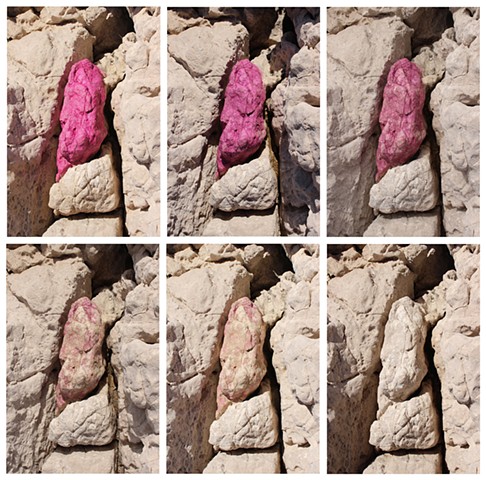 This past Spring, French sculptor Romain Langlois and American artist Jenine Shereos paired up for an artistic collaboration in Cassis, France entitled “Symbiose.” Langlois works primarily in bronze, creating monumental boulders that appear to liquify and stretch apart. Shereos, whose background is in fibers and textiles, is best known for her series of leaves intricately stitched entirely from strands of human hair. Together, the pair took to the distinctive landscape of southern France to create their unique interpretation of land art.

The two artists quickly discovered that by crushing the fruit of the Prickly Pear cactus, ubiquitous in the Mediterranean climate of Southern France, they could create a fugitive natural pigment that would bring individual aspects of the landscape into focus for a brief moment. Shereos writes, “The color is so intense when it’s first applied that it almost looks artificial. It is as if each rock is brought into focus, blooming only for a brief moment, like the ephemeral petals of a flower.”

Shereos, who also teaches a class on natural dyes at Massachusetts College of Art and Design in Boston writes:

Throughout human history, ways of procuring different shades of crimson, magenta, purple, and red have been sought after as a natural dye for textiles. Perhaps the most famous source of red dye is derived from the cochineal insect, which was first used by the Aztec and Mayan peoples of North and Central America. Cochineal insects feed on Dactylopius Coccus, also known as the “Prickly Pear Cactus” or “Figue de Barbarie.”

Noticing that this species of cactus is prevalent in the Calanques, we became interested in the ways that this pigment might interact with the landscape. By crushing the fruit from the cactus, we were able to obtain a natural pigment that could interact with the environment. Natural dyes, particularly those obtained from fruit, are very sensitive to sunlight and require a mordant to bond chemically with fabric. Since the pigment that we obtained from the cactus fruit is not permanent, we could obtain a vibrant and striking color that lasts only hours or days at most, when subject to the intense sunlight of southern France.